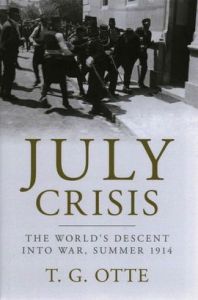 The centenary of the Great War has prompted a kind of collective introspection among the nations that participated in this slow-moving, brutal slog. New books, articles, exhibitions and documentaries attempt to piece together the narrative arc of “the war to end all wars”. Sadly, the 1914-1918 war did not end all wars. In fact, the Great War has rightly been called the “primal catastrophe” of the twentieth century because it ushered in all the major calamities of the twentieth century, reason enough for its intense and ongoing scholarly interest.

In his latest book, Thomas Otte presents a blow-by-blow account of the decision-making processes within the major European capitals following the assassination of the archducal couple in Sarajevo ― often viewed as the event that ostensibly triggered the July crisis. None of the European chancelleries emerge from the July crisis with reputation enhanced as each combatant participates in a game of brinkmanship with calamitous repercussions. And none of the key European decision-making centres is let off the hook as Otte captures the tantalising missed opportunities to avert a global catastrophe.

As the clock ticked, political and diplomatic efforts in Berlin, Paris, London, Vienna and St Petersburg aimed at averting a military conflict were constantly marred by disagreement, antagonism, fear and mistrust, the chorus of dissident voices as much in evidence within key European decision-making centres as between them. Otte meticulously follows each twist during the July crisis as the Great Powers seemingly sleepwalk toward war. Rashness, miscalculation, bluff and deception sabotage each sensible move until the scope for mediation and compromise vanishes and war becomes inevitable.

And yet the Great War was not inevitable. On the eve of Franz Ferdinand’s assassination, with few clouds on the horizon, most European statesmen thought war unlikely. Despite two recent wars in the restive Balkans region, the ongoing stockpiling of arms and the ratcheting up of militant attitudes in some quarters, the European political system displayed a surprising capacity for crisis management and resolution. European statesmen spoke of a new era of détente. Even the Permanent Under-secretary of the Foreign Office, Sir Arthur Nicholson, well known for his pessimism, observed in May 1914 that since assuming his present position in 1910, “I have not seen such calm [international] waters”. Yet, within two months, the Great Powers were at war.

What began as a localised war in the Balkans between the Habsburg Empire and Serbia quickly escalated into a continental war and then into a global conflict whose impact still reverberates today in places far from the western front like New Zealand and Australia where the horrors of the war remain something of a national obsession. As the realities of the Great War began reaching an anxious public in the various European states, the combatants quickly began shifting the blame for its outbreak onto their opponents. And the blame game has never really ended. The aggression of Germany has most often been cited for escalating the conflict, but Otte refrains from playing the blame game by showing instead that a cold-blooded, but deeply flawed, military logic took hold of all the key executive centres of Europe, turning an isolated conflict in the Balkans into a continental disaster. What’s more, the haphazard, even dysfunctional nature of foreign policy decision-making in the European Chancelleries, though especially in the three eastern monarchies, absolves one and all from the charge of having deliberately pre-planned and executed a war in the summer of 1914.

European foreign policy settings during this era were made by small circles of competing actors in the European capitals who had to balance the demands of imperatives and different hostile, potential threats. Risks and rivalries in different parts of Europe were intricate enough to ensure that the actual chronology of events following Franz Ferdinand’s murder was never the calculated intention of one person or group. Civilian leaders and military commanders, then as now, could not know the future. The pre-1914 European world was a complex and threat-rich environment marked by multi-polar rivalries, low levels of trust and high levels of paranoia. In this intensively interactive setting, all the Great Powers were prepared to accept war so long as they were not seen to be provoking it.

July Crisis lays bare the struggles among a small legion of men (they were all men in this era) who made decisions in the summer of 1914 that would escalate a genuinely European crisis into a world-wide conflict. The paradox of 1914 is that Europe was plunged into a horrific conflict that many notable contemporaries believed was entirely avoidable. Without the war, Ulyanov (Lenin), Dzhugashvili (Stalin), Bronshtein (Trotsky), Broz (Tito) and Hitler, all living in the Habsburg capital in early 1913, might well have languished in complete obscurity, neither to leave their stain on humanity, nor to wield the kind of savage power that would make each of them household names during the twentieth century.

Otte has done a splendid job dispelling the thesis that no one state should be made to bear sole responsibility for the inception of the war. Rather, the accumulation of risks across Europe in July 1914 was a kind of collective failure of attention on the part of key European participants who were determined on certain courses of action without fully understanding their horrific consequences. The Great War unhinged the modern world, leaving a blot on nations, communities and peoples around the globe. A century after Sarajevo, the consequences of it still haunts us.