Everyone I Love Is A Stranger To Someone 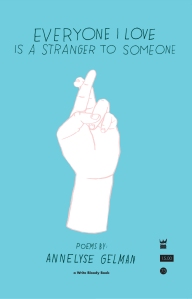 Annelyse Gelman is a fearless writer. Unafraid of vulnerability, of her own sublime awkwardness, of delving deeply into pain, she reaches out towards her readers with her emotional transparency, which is never mawkish, never self-indulgent, but self-aware, wise and ultimately very funny. This is a writer who can hold the ultimate cognitive dissonance in her head, whereby everything is utterly meaningful and everything is utterly meaningless – the book’s title reflects this and so do many of the poems.

In the opening poem of the collection, ‘Ars Poetica’ she introduces herself:

Hello,
my name is Annelyse. I have
chrysalized myself in the liberal arts
and now emerge, grotesque
insect, able to do nothing
but talk about everything.

Gelman’s style is playful without being cloying, funny without being shallow, fast-paced without being manic. The balance she achieves in these poems is breathtaking – a tightrope walk between the ridiculous and the sublime. She has a way of following threads of thought and (what appears to be) free-association through labyrinthine meanders into deep meaning, sharp emotional hits to the heart. It is clear how crafted, how considered, these poems are – the apparent randomness is obviously not at all random. Gelman has a way of injecting such levity, lightness of touch and energy into these poems whereby the reader experiences some of the poems as a spontaneous, direct rant. That Gelman can hide her effort and craft is a testament to her talent, such direct emotional connection in poetry is rare.

The voice in the poems is declarative: ‘Life is possible because we fall in its direction/ and/or because we keep our distance’; and intimate: ‘The migraine surges at fake noon/ and I holler turn the sun off. God, it’s bright in here. / Everything I see is contaminated with light’. There is a sense that as the reader you are being drawn into deep intimacy, you are privy to the poet’s best anecdotes, biggest hurts, most complex existential quandaries, her ‘factory/ of regrets and … stupid objects’. However, it’s not heavy, it has the emotional effect of sharing a load, rather than being burdened with one. Gelman’s poems say Here am I, in all my messy glory, and I really SEE you, in yours. She says in ‘Selfie’:

When I give advice to others
I’m really talking to me. Yes, by all means
abuse the medium. The medium’s been very
very naughty. Even its safe word
makes me feel dangerous.

The figures in the collection are surprising and unusual, Gelman has a way of almost banging things together in metaphor so that at first they might seem abrasive or unlikely but then with time and within the explorations of thought in the rest of the poem, suddenly they seem apt, perfect:

There is a tendency in post-post-post-everything contemporary poetry for writers to be afraid of declaring anything, to fully inhabit and reveal their emotional terrain. This collection is full of big (in scope) words which might make lesser writers nervous: love, anger, life, fire, people, sex, death…and the poet has something searing and original to say about them all. Gelman is not afraid to declare, to assert. She throws down emotional experience with a direct, almost off-hand style backed by an intelligent self-knowing, a crisp intellect and a clear eye for beauty. The writing is never didactic though. It never wags a finger, never judges or insinuates wisdom. All of the large concepts are grounded by tangible imagery from the world around us. It’s poetry of the world, the emotions, the senses with plenty to excite the mind also.

To end with another quotation from the opening poem, ‘Ars Poetica’ Gelman breathlessly throws down her own creative manifesto and invitation to the reader to be brave:

…I’m pretty sure
everything is a rough draft
but I’ve also been told I have
commitment issues but I’ve also
been told not to stare at the sun
and thought fuck it, why stare at anything
that doesn’t blind you?

Why indeed? These poems – on top of their wonderful dark and playful humour – ask (or perhaps demand) the reader join her in really ‘going there’, going to those tricky, ambivalent, painful, funny places that make us human and give our lives meaning. This book both made me laugh and made me feel less alone in the world – it’s rare for a collection of poetry to achieve both, and so well.

Annelyse Gelman. Everyone I Love Is A Stranger To Someone. Austin, Texas: Write Bloody, 2014. Print.

Helen Lehndorf  is a writer, editor and teacher from New Zealand. Her poetry collection The Comforter made the Best Books of 2012 list in the New Zealand Listener. http://www.seraphpress.co.nz/the-comforter.html