Why you should read: The Importance of Being Earnest

W!ld Rice Singapore’s 2013 staging of Oscar Wilde’s classic play got the Singapore Review of Book‘s Jeremy Fernando thinking about being nice to colleagues. 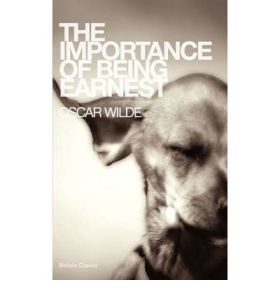 On being too earnest…

There is nothing more annoying than a colleague demonstrating that (s)he is trying hard. Except perhaps the colleague who is actually doing so.

For, unless we are completely self-absorbed, we accept that there will always be someone else better than us; at whatever it is we do. What annoys us is when a colleague gets ahead not due to the fact that (s)he is better, nor even if (s)he has simulated doing more, but when she actually does more.

And this is precisely the lesson of Oscar Wilde’s The Importance of Being Earnest: it is all in a name, and nothing more. Regardless of your characteristics, what you can do, etc., your name supersedes everything. For, even as both Algernon Moncrieff and Jack Worthing are perfectly fine men (or good rascals, depending on your leanings), Cecily Cardew and Gwendolen Fairfax will have nothing to do with them unless they were appropriately named.

One could read this as a warning about the superficiality of humankind—that one cannot see beyond surfaces, names, brands—but that would be missing the point. It is not that peeling back the layers of illusion reveals a reality; it is that illusions are crucial to reality. We see this in our daily rituals: it is irrelevant whether we mean a good morning to another; failure to proclaim it would cause an actual rift in the relationship. What is even worse is if the one receiving the greeting does not respond. For, it is not the content of the response that matters (one can reply to how’s it going? with the exact same question and all would be fine), it is the fact that there is a response at all. In breaking the appearance that we care for our fellow man we potentially rupture the entire relationship. Which is why “the truth isn’t quite the sort of thing one tells to a nice, sweet, refined, girl.” Whether one believes what one is told is also beside the point: it “does not affect the wonderful beauty of his answer.” After all, there is nothing more beautiful than a ritual in which the parties involved are insincere—even more so when they partake of it in full knowledge of its artifice.

This is why, even though Gwendolen only wants to marry an Ernest, she does not discount Jack; even when she discovers that he had hitherto been lying about his name. What is crucial is that he has been keeping up appearances, as an Ernest. Or, in Algernon’s words: “You look as if your name was Ernest. You answer to the name of Ernest. You are the most earnest-looking person I ever saw in my life. It is perfectly absurd your saying that your name isn’t Ernest.” The fact that Jack eventually discovers that his birth name is Ernest is hardly the point: after all, when he finds out, he exclaims, “it is a terrible thing for a man to find out suddenly that all his life he has been speaking nothing but the truth.” The important thing—the thing that brings him together with Gwendolen—is the fact that he is performing the fact that he is Ernest; that he looks like Ernest.

If one plays the game properly in getting ahead, one merely shows that one is trying hard without actually doing so. In actually trying hard, one is not merely showing oneself to be earnest; one is actually being so. Here, one must not forget that the rules of engagement in any office entail a notion of us vs. the management (or if you are in a hippy mood, the people vs. The Man). Getting ahead by simulated work protects the illusion that we are colleagues, working together; and if one gets promoted—and here, we must never forget that the advancement of one always comes at the expense of another, all others—the fault lies with the boss. And thus, we can maintain the collegiality based on the notion that at least one of us had hoodwinked The Man: more importantly, even though everyone else is left behind, everyone can tell themselves, maintain the appearance—or even better, tell ourselves—that they were involved in the promotion of one of the group, one of us.

Actually trying hard only reveals too clearly that we are actually competitors.

So, even as we know that getting ahead is always at the expense of a colleague, we need play at maintaining the scene—in precisely the  sense of work to upkeep the image, idea even—of batting for the same team. Even if we might actually be trying hard. Especially if we are. For, what is at stake is precisely the notion of collegiality itself: that all of us, despite us being in competition with each other, are in it together. It is an attempt at maintaining the duality of the situation—of there being at least one other person sharing the situation with us, of us being in the same boat—whilst keeping a distance from, ignoring, the elephant in the room; that every duality brings with it an echo of a duel, if not by necessity, at least its possibility. Which might be even more worrying: for, if always in potential, it is always so possible that it has already happened and all we are waiting for are its effects, of how it would affect us. Thus, in order to keep it in abeyance, in our desperation to maintain its permanent deferral, we have to earnestly maintain—in the very sense of manage—the veneer of being colleagues.

And, what better way than by demonstrating to the boss that we are working, whilst maintaining the performance of pulling wool over the man’s eyes—especially if that is the last thing on our minds.

For, after all, “in matters of grave importance, style, not sincerity, is the vital thing.”

This review refers to: Oscar Wilde. The Importance of Being Earnest: a Trivial Comedy for Serious People. London: Bibliolis Books, 2010.

Jeremy Fernando is the Jean Baudrillard Fellow at the European Graduate School, where he is also a Reader in Contemporary Literature & Thought.

(A version of this review was originally published in One Imperative in December 2012: www.oneimperative.com)