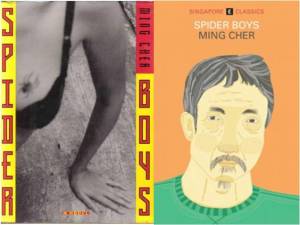 Kim is scare of traffic, makes everybody laugh when she hesitates about as they cross busy roads.
Big Mole was happy to lead her across. Big Mole ask with her brown Malay face, “Where do you stay?”
“Ho Swee Hill, you know where?” Kim ask back. (p76)

Ming Cher’s Spider Boys, is the rare Singaporean novel that resists an appropriation of, and absorption by, predictable historiographies surrounding colonialism, the Second World War, national identity, censorship, etc, that make up the checklist of narrative responsibility – the phonetic proximity of the two protagonists’ names to those of the country’s founding Prime Minister notwithstanding.

Spider Boys’s initial claim to fame as the first Singaporean novel to be published by powerhouses William Morrow and Penguin had hinged on the fact that it is “Written in the street-slang English that is one of the author’s native languages” (dust jacket), immediately seizing on the possible exotic quality of the linguistic appeal made available by its mode of expression.

And it is this non-standard rendition of 1950s-era street life in Singapore that has proven to be the novel’s enduring contribution to the cultural consciousness of the country – one that transacts in a recognisable past without resorting to the numbing hypnosis of nostalgia so popular in this country.

Spider Boys is a compound of various generic narratives: a coming-of-age story, gangster fiction, wuxia, folklore, with action sequences that befit the best of the Epic tradition.

Throughout, its spider fights, at times described in poetic detail, echo as an extended trope that connects the young characters’ experiences with the great game of life, involving skills-honing, fortune, spectacle, and ritualistic fervour.

These evoke some crucial universal qualities that appeal to the reader without limiting the engagement to realist obligations. Fiction and its imaginative impetus dominate the narrative proceedings in Spider Boys, held fast throughout by a narrator who is unconscious in the way with which he deploys his language of choice, projected, in fact, with a kind of wide-eyed innocence that truly befits the conflation of naïveté and faux-bravado of his young characters.

And let us be clear, it is a kind of English that is not grounded in the quasi-formality of “Singapore Colloquial English” nor even the looser descriptor of Singlish that others embrace or dismiss, according to their own proclivities.

No, Ming Cher’s is a free form adaptation of the kind of language patterns that dominate the landscape of the world that he has created. Its inventiveness lies in the fact that it is improvisational in its channeling of various, presumably, Singaporean Chinese dialects and expressing them into approximations of English. And it is in this inexactitude that meaning and meaningfulness emerges – in the same manner that a plausible connection can be made between the enigmatic forces running the underground chap jee kee syndicates and the causes of the mysterious Bukit Ho Swee fire of 1961. Insinuation, we are reminded, is often far more powerful than precision.

To this end, the language that pervades Spider Boys embodies the authenticity of its own world rather than that of a version (idyllic or otherwise) of Singapore. And it is also the consistency with which the linguistic mode is sustained throughout the novel that reminds us that this is not necessarily a gesture of self-exoticisation on the part of the author, but rather an attempt to do nothing more than tell a story and to tell it well.

Kim was afraid of the heavy traffic and made everybody laugh when she hesitated at the busy road. Big Mole was happy to lead her across. She asked, “Where do you stay?”
“Bukit Ho Swee, you know where?” Kim asks in return. (p87)

Having been out-of-print for the best part of the past 15 years, the recent reissue of the Spider Boys by Epigram Books under its Singapore Classics imprint should therefore have been a cause for great celebration. After all, a new generation of readers can now have access to the thrilling energy that resonates throughout the novel, its idiom finding new ears upon which to cast its spell.

Unfortunately, all that is not to be.

For some inexplicable reason, the editors saw it fit to re-work the novel’s language into ‘proper’, ‘standard’ English, replacing most of the language quirks of the original text with the limp English of free-to-air television.

Robert Yeo writes in the Introduction to this reissue that:

The writer of fiction who writes in English but whose characters do not speak English faces several problems in presenting them. One way out of the problem is for him to have his narrator use a standardised English while his characters speak a variety of non-standard Englishes (sic). The narrator is impelled to create, in dialogue which is spoken, authentic speech, or – more accurately – speeches, if the characters belong to different dialects. This difference has to be addressed and one way is to use the idiom peculiar to the language to be presented. (xi)

This act of justification does not address what these “several problems” are, and why anybody should see the need to find a solution – as if any of it can gloss away the fact that a perfectly legitimate way of telling a story has, in one dubious instance of editorial mutilation been reduced to something beyond recognition.

And, as if to underline the essential banality of this massacre of the original spirit of Spider Boys, Yeo’s concluding remarks makes a mockery of the fictional imagination by an act of convenience, sweeping this mess of an effort under some make-belief carpet: “I hope enough has been said about the linguistic choices facing the writer in English who presents non-English-speaking situations and places, enough for the reader to move on to focus on other fictional characteristics.” (xiii)

Unfortunately, by making this radical change to the novel, all that has been achieved is to bring attention directly to those issues of (language) identity, censorship, ‘responsibility’ that are really not the province of this novel.

What was the hallmark of one of the most progressive examples of a successful Singaporean literary voice, made even more important by its ability to uncover a sense of artistic liberty in an otherwise narrow linguistic landscape, is transformed into a kind of contrivance that is not only worrying but also downright dangerous. While writers and art practitioners have for years been urging for more space to experiment with forms of expression, the self-imposed cleaning up — let us face it, it is a kind of censorship — of the language in this re-issue of Spider Boys, constitutes a step backwards.

At the heart of prose fiction is its ability to provoke our recognition of the layered experiences that surround us, either through a sense of familiarity or certain dimensions of recognisability. Fictional writing is not only derived from plot details, it also attains its aesthetic quality in the textured manner by which language is woven through the telling of the tale.

This is why science fiction and fantasy writing continue to have a place in the literary imagination. And it is also why novels such as A Clockwork Orange, Ulysses and – to take a more contemporary example – Trainspotting have endured and have continually appealed to generations of an international audience.

What has happened to Ming Cher’s novel, then, is the equivalent of neutering Irvine Welsh’s use of the Scots dialect, eradicating Anthony Burgess’s Nadsat, and – heaven forbid – rendering James Joyce’s incantations into textbook English.

By having its language homogenised, the very essence of Spider Boys – the inventiveness that is at the core of its artistry – is thoroughly diminished.

“By golly, the dear reader has been left the poorer for it,” as Ming Cher’s Kwang and Yeow would never have said.