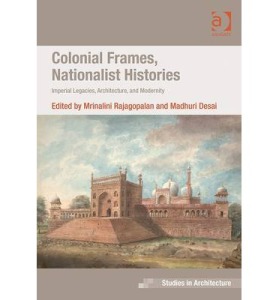 The history of urban growth and architecture are inextricably linked, and provide a good lens through which we can consider the rise and fall of social and political practice. As it has emerged in the global south, urbanism has become the site of both the colonial project, as well as the post-colonial re-imagination of the sense of collective selfhood. Colonial Frames, Nationalist Histories: Imperial Legacies, Architecture and Modernity collects some of the most pointed scholarship in this regard, while setting the path for an expansive consideration of the place of architecture in a by now well established post-colonial intellectual space.

The volume, thoughtfully collected by Mrinalini Rajagopalan and Madhuri Desai, explores various dimensions of the shifting, shifted modes of colonisation that took place from the mid-18th century, at the height of the global slave trade, through the contemporary landscape of globalisation. The essays collected here testify to the ability of the built environment to manifest both the legacy of empire, as well as the climate of resistance that gave rise to successive (and, relatively, successful) nationalist discourses.

The resultant identity-formative concerns are the very ones that have been at the centre of the academy’s concerns for the best part of 60 years: race, class, gender – the very site of the culture wars. Architecture bears witness to the deeply felt concerns about difference that is at the heart of coloniality and the post-colonial condition. But, to the credit of the editors and their contributors, this book does not lose sight of the subject of their concern: the architectural texts themselves, the examination of which gives to the volume its greatest value.

Architects and scholars of architecture, particularly those with an investment in the areas of national-identity concerns, often find themselves in a bind: how much of the legacies of a past should be valourised, especially if that past carries a baggage of abject violence? As the editors write in the Introduction: “The specter of colonialism thus continues to haunt […] even the contemporary moment.” (2) But what they are clear about, and which is continually demonstrated in the book, is the unavoidablility of the colonial project in relation to the physical landscape: “colonialism has shaped the institutions, forms, and spaces of a global modernism, which in turn has framed the proliferation of national imaginations around the world.” (4)

Here, a key term comes into sight, and anchors the discrete architectural subjects that are explored throughout the volume: frame. It is in fact an acknowledgement of that impossibility of dissociation from the multitudinous perspectives of the global imaginary, because there is not one single colonial gesture but many – and many colonialities.

In their Introduction, the editors make a rigourous argument that ties the history of colonialism with “modern articulations of identity” (4) – and indeed as the basis on which cultural modernism finds expression in architecture and urban growth. There is, in all of this, an acute awareness of the dominance of Western traditions that do not take into account the demonstrative richness of architecture that can be found elsewhere.

Cultural – and, in particular, architectural – modernism, they suggest, is not the domain of a single, deterministic socio-political trajectory. It is, in fact, formed of a confluence of a variety of influences – a collection of differences that make up a landscape of unity. And what variety the essays address!

The three chapters of the first section identify the Indian architectural landscape as one that is rich with the history of imposed sensibilities. But there is also an insistence that the colonial relationship at work as being bi-directional: that the intricacies of Indian heterogeneity had a lot to offer the staid rigidity of Victorianism that had permeated much of British architecture in the 19th century. The consideration of the Indian built environment also forms a useful base for the establishment of colonial apprehension viz-a-viz urban developmental history.

At first glance, the second section of Colonial Frames, Nationalist Histories appears to be a curious inclusion, not least because its three chapters do not have as ostensible a unifying thematic thread as the other sections. And yet, they do occupy a necessary place in this volume, because they address the modes of thought and practice by which the engineering of the physical space may (indeed have been shown to) engage with identity disparity that is crucial to the colonial enterprise. In this, the museum embodies one such gesture of conducting heterogeneous transactions (France and America), and the metropolitan streets and communal spaces are another (Georgian England). The institutionalisation of difference – often by way of commoditised exoticism – is a third (Hawaii).

In the third and final section of Colonial Frames, Nationalist Histories, that tension between legacy-conservation and critical engagement with historical narratives is given sustained play. The four essays in the section confront the plight of the modern city and its subjection to a multitude of pressures, many of which relate to a sense – imposed or inherent – of obligation to its architectural heritage. The subjects here – Singapore, Malaysia, Hong Kong and Shanghai – have variously undergone processes of rapid urbanisation. The latter notion, an extension of globalisation, is tied to expressions of plurality and diversity – ideas, the essays suggest, that have been a part of the four locales’ architectural and urban heritage even before these have become academic buzzwords. The methods have not changed by much in the contemporary metropolitan landscape: zoning and ‘gazetting’  have merely found new excuses by which to create boundaries – real or imagined – within the cityscape.

In this, and the other arguments raised throughout this collection, one consideration continues to occupy our attention: that the resounding influence of colonialism continues to confront the modern sensibility with “difficult questions”. And yet, the fact that the editors and their contributors have taken these questions by the horns, and given them thorough analyses, is a testament to the contribution of Colonial Frames, Nationalist Histories: Imperial Legacies, Architecture and Modernity to the ongoing discourse. It is refreshing to find scholarly work of this nature not bogged down by the rhetoric of theoretical self-justification and staking of irrelevant ideological claims, and instead concentrating on the critical task at hand. To this end, the two editors, self-confessed young scholars, have set a high standard for themselves.