Why you should read: Plato’s Phaedrus

In this piece, Jeremy Fernando argues that, instead of going to a dating coach, or reading a self-help book from a ‘pick up artist’, one should go to the master himself–Socrates–and in particular his teachings from Plato’s Phaedrus. 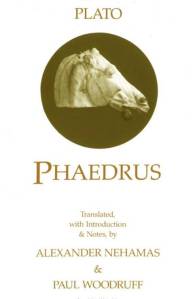 Is that a scroll in your robe, or….

It seems that teaching is fashionable these days. One cannot open a magazine or the newspapers—let alone turn on the television—without being confronted by a life coach. You would have thought that after a while, the trend of people telling others what to do with their lives would die off. But it seems that this Petri dish has spawned yet another variant: the dating coach.

I am not here to decry those who teach. I do it myself: and it is serious work. Or, even what they teach. The fact that so many dating coaches are still in business suggests that they have willing students. However, not all teachers are born equal. And since learning is mimetic, one’s potential could be hampered by a sub-standard teacher. Thus, it stands to reason that one should study with the best.

Which is why, if you are going to choose a dating coach, you should pick Socrates.

Ostensibly, the Phaedrus is a text on rhetoric—a meditation on the craft of writing. At least this is how it is usually read. Or, more precisely, this is usually how it is taught in classes. But, since Plato argues that rhetoric at its finest is found in its form—and not just in its effects (persuasion: which is the lower level craft practiced by lawyers and such scum)—one should pay attention to the form of the text itself. For, to pay attention exclusively to the logic of the argument is to be guilty of the same things that those who merely attempt to persuade do.

Which is where Socrates comes in. Here, one must not forget that even though Socrates is Plato’s teacher, we are reading about him as a character in Plato’s epic poem. And this means that each of his responses should be read as a response to the other character in the poem. Thus, when we read the poem, or more specifically the conversation between the characters in the poem, what their responses are trying to do is as important as what they mean.

And when we speak of form, we must also pay attention to the context—in other words, location, location, location. For, it is of no coincidence at all that Socrates takes the other character, Phaedrus, for a walk away from the city—and, by extension, away from norms, mores, laws, that govern citizens; rules that inhabit their habitus, guiding, shaping, attempting to ensure that they act, behave, live, in a certain manner. Thus, Socrates is setting the stage in an attempt to open new possibilities, thoughts, within Phaedrus. [Here, you might want to pause and reflect on what your mother always told you: “never go with someone you don’t really know to a strange place.” Perhaps what she neglected to tell you is that it is not just because it is unfamiliar that makes it potentially dangerous (in the sense that a different context causes you to act improperly) but more radically that the very strangeness that one encounters is within one’s own self—that it is one that might well become improper.]

One must also never forget that Phaedrus is a student of Lysias. And here, one must remember that the student-teacher relationship in ancient Greece is almost always pederastic: in fact, without an elder male to be the mentor a young boy could not expect to rise in society. What Socrates is trying to do is teach Phaedrus; that is, get the latter to become his student. And here, when we hear teacher, we should allow all the possibility of pedagogy to resound: in particularly that of guiding, of leading, which opens the register that Socrates might well have been trying to lead him to question convention, open Phaedrus to potentialities, or in common parlance lead him off the beaten path, lead him astray. In other words, Socrates is doing nothing other than trying to pick him up.

To witness Socrates’ mastery of the craft, let us eavesdrop for a moment on the conversation in section 236B-E:

So:       Oh, Phaedrus, I was only criticizing your beloved in order to tease you—did you take me seriously. Do you think I’d really try to match the product of his wisdom with a fancier speech?

Ph:       Well as far as the goes my friend, you’ve fallen into your own trap. You have no choice but to give your speech as best you can …

So:       But, my dear Phaedrus, I’ll be ridiculous—a mere dilettante, improvising on the same topics as a seasoned professional.

Ph:       Do you understand the situation? Stop playing hard to get! I know what I can say to make you give your speech.

Ph:       Oh, yes I will … I swear in all truth that, if you don’t make your speech … I shall never, never again recite another speech for you …

So:       My oh my, what a horrible man you are! You’ve really found the way to force a lover of speeches to do just as you say!

Even though he is attempting to make Phaedrus his new boy toy, his true brilliance is in getting the boy to convince him to do what he wants to do in the first place. Instead of the banal strategy of demonstrating strength and power (which is recommended by so many ‘how to’ books and dating coaches), Socrates seduces his boy through a display of weakness. And what else is this but rhetoric at its very best: creating the platform to allow the other to persuade himself.

This leads us near the end of Phaedrus where Plato argues, through Socrates, that the whole point of rhetoric is “to teach … or to persuade.” To which his boy replies, “Absolutely” (277C). At this point, you might expect Socrates to take advantage of the situation, take the boy. But his master-stroke is in sending him back to Lysias. (278C). For, he knows that by spurning him at the height of his desire, Phaedrus will be back for more.

But you really should be wary of letting me convince you to read Plato, or worse still, teach you anything …

[a truncated version of this review was first published in Prestige Singapore (June, 2012).]

Jeremy Fernando is the Jean Baudrillard Fellow at The European Graduate School. He is the author of 5 books—most recently Writing Death. He is a firm believer in the notion that if you read carefully, you’ll find much new in the old.