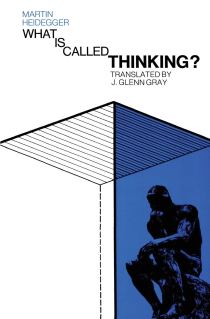 To teach, perchance to dream,
aye, there’s the rub

Keeping in mind that dreams come to one, envelop one, quite possibly take over one — and not only does one never quite have control over the dream, it might well write itself into one in ways that will always remain beyond one’s knowledge.

A dream writing; an unreadable writing; perhaps an invisible writing;
or maybe a writing that is awaiting reading. And where the effects of said writing are precisely its traces unveiling itself — waiting to be read.

Where perhaps, to teach is to risk being in the realm of the unknown — in the oikos of the idiotes. Stumbling around in the dark.

Trying not to forget that the scene of teaching be not so much a transfer of information, but involves the opening of selves to the possibility a coming-together, an inter-course — with something which, or someone(s) who, which might remain beyond one’s cognisance, until or even after, said encounter.

Here, it might be helpful to turn to one Martin Heidegger and his reminder that “the real teacher, in fact, lets nothing else be learned than — learning”. And, the only thing that the teacher is better than her students at is learning: simply because (s)he is “far less assured of his ground that those who learn are of theirs”. [1]

And where the role of a teacher — bearing in mind that it is a particular performance; whether one embodies it or not is another question — where becoming a teacher, entails nothing other than learning alongside — maybe a learning to learn better than — her students.

Which has nothing to do with demonstration, putting on show (montre), even less a pedestal.

For, as Jacques Rancière, channeling the experimental Belgian teacher Joseph Jacotot, says, “to explain something to someone is first of all to show him he cannot understand it by himself … explication is the myth of pedagogy, the parable of the world divided into knowing minds and ignorant ones, ripe minds and immature ones, the capable and the incapable, the intelligent and the stupid.” [2]

And that is, for Jacotot, ultimately the principle of  “enforced stultification”. [3]

Which is nothing other than a game of power: for, “there is stultification whenever one intelligence is subordinated to another”. Therefore, as Jacotot continues, “the two faculties in play during the act of learning, namely intelligence and will, had to be separated, liberated from each other”. In this case — because both the teacher and her student are learning, and neither are claiming to know, to fully understand the object of their learning —  “a pure relationship of will to will had been established between master and student … [with] the intelligence of the book the thing in common [between them]”. Thus, “the student [is] linked to a will, Jacotot’s, and to an intelligence, the book’s — the two entirely distinct”. [4]

And this separation is called, “emancipation”. [5]

And even if we acknowledge Jacotot’s disdain of Socrates, one cannot ignore the fact that both of them were, in their singular ways, challenging both the norms of what it means to teach, and the relationship called the teacher-student one, contesting the very relationship called learning itself.

And, if a seminar is about the possibility of dissemination, perhaps even insemination, then the question that we are quite possibly facing — the quest that lies right in front of our eyes — is what does one do with the prophylactic between.

How to touch without touching as it were —
bring forth a touchless touch.

Which might well be the question of:
how does one engender the space for the possibility of an immaculate conception.

And, perhaps more importantly — if we are to take the question of emancipation, of freedom, seriously — how does one engender said conception without being the author of it, without authorising it, without enframing it, sullying it even, with echoes of authority.

Which is the question of: how does one bring forth teaching without being a — the — teacher.

Here, it might once again be helpful to turn to Martin Heidegger and his reminder that the essence of technology is enframing: making clear, clarifying, drawing boundaries, and thus containing, constraining; where it is the legein which encloses the possibilities brought forth by tekhnē, limits it within the realms of knowability, logos; cages the potential of what is brought forth by craft.

Which suggest that — if we are to take seriously the possibility that teaching is the setting of the stage for the potential called learning — we might have to attempt to think of a stage beyond a frame.

Which becomes doubly-tricky when said staging is taking place through a screen: for, that would entail imagining a screen that is not just a frame even as it frames everything that we see.

However, we should try not to forget that a screen both shows and hides away at exactly the same time. Which means that even as we screen, what we are screening is potentially being screened, screened-off, even as it is put on screen; and perhaps even not by us, but by the screen itself, in the very act of screening. That even as we are putting on, and exposing ourselves, to the light of the screen, it is already layering us with sunscreen.

And here, we should try not to forget Heidegger’s reminder that technology only unveils itself, that we only manage to catch a glimpse of its essence, in moments when it breaks down: thankfully, as Paul Virilio tries to never let us forget, each tekhnē brings with it its own, its singular, catastrophe, its own down (kata) turn (strephein), dip if you prefer.

Which is not to say that in this a situation that can be programatised, planned, instrumentalised: far from it.

Which also means that all we can do is to await the possibility of such a moment, and attend to them as they happen, if they do: all whilst bearing in mind that waiting is not passive; far from it. But that it never knows, cannot know, what it is awaiting — otherwise futurial possibilities are always already enframed, limited, by what is expected. Where, if waiting is about the possibility of an encounter, it is a state in which one waits: nothing more, and infinitely nothing less.

To wait — to think;
perchance to dream

Perhaps even whilst we are touching screens, rubbing the screen with our digits — writing, staining, painting, on screens with our fingers.

Opening the possibility that it is our fingers (digits) that are doing the feeling, walking, seeing, whilst opening — by touching, caressing — the typewriter, keyboard, screen.

All whilst wholly other from each other —
but quite possibly in a situation where a pure relation of will to will can be established.

And with one’s fingers — with all of the fingers in the dance — perhaps making our languages, our skins, our screens, vibrate with an intensity that brings forth certain potentials within them.

Alongside out voices — which go through the screen, along with silences, gaps, mishearings, un-hearings, double entendres; hearings screened by the screen.

Like a veil (un voile) —
which perhaps, in moments, momentarily, turns, transforms, trans-substantiates even, into a sail (une voile), flies away (s’envoler) like a thief (un voleur) in the night.

And if this sounds like word-play, like merely playing with words, one might take comfort in the words of the great Australian philosophers — Barry, Maurice, and Robin, Gibb — that “it’s only words, and words are all I have/ to take your heart away”.

And, as Roland Barthes tries to never let us forget, “language is a skin: I rub my language against the other. It is as if I had words instead of fingers, or fingers at the tip of my words. My language trembles with desire”.

to play,
perchance to dream …