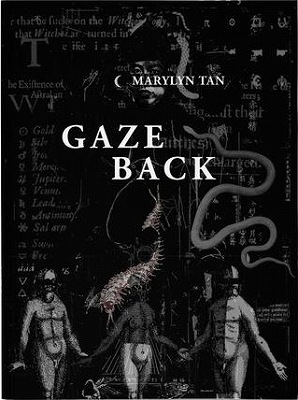 Twisted and unconventional, Marylyn Tan’s debut poetry collection Gaze Back opens with a poem about, in her own words, “steaming up your vagina.” Exploring themes such as sexuality, queerness, and the female body, this poem is a strong introduction to a collection that voices the clash between tradition and female sexual expression. This clash becomes particularly clear in the poems concerned with Catholicism and the portrayal of Jesus. The author here takes the image of Jesus and transforms it into that of the familiar, struggling young girl. Jesus is bleeding, walking home alone at night, and, most prominently, trying not to be slutshamed: “jesus pulls his robes a little tighter / doesn’t want to be one of those prophets.”

Tan states that she writes these poems for those in an “endangered body,” and the body of Jesus is indeed endangered here, crucified “like a good girl.” Religious reimaginings are common enough, and encountered often in poetry. Western poets especially are prone to anti-religious writing that lacks nuance and speaks only of the oppressive nature of religion, often falling back on cliche. In contrast, Tan’s unconventional approach lies in the provocative writing of Jesus as not the enemy but the friend, oppressed by the patriarchy as much as the writer herself. Jesus’ offerings of his own body and blood for consumption become grotesque in their enhanced, feminine familiarity, the prophet a target of the male gaze.

Tan is neither restricted by content nor form, continuously playing with the reader’s expectations. There is palpable enjoyment behind the broken rules in her poems, often ending on a note that feels almost like a satisfied, knowing smile. The section of poems titled “Sexts from the Universe” reads particularly cheeky, featuring pieces of physical text found in Singapore and London. These are not sexual in nature for the most part (“FREEDOM TO FUCK” being a notable exception) but are presented as sexts nonetheless. This choice leaves the reader confused and a bit lost, perhaps a fitting feeling for something sent from the culprit of many an existential crisis. The implication that the universe, seemingly vast and infinite, might be sexting us draws a fascinating link between sexuality and our wider existence, recalling astrological readings about love and relationships. The information that Tan has encountered and captured for this section of poems becomes a statement of her place in the world and the power she attributes to her own existence, the universe seemingly flirting with her through cryptic messages. The connection she establishes between space, magic, and sexuality further links to the later poems in the collection, inspired by alchemical symbols. The author here reveals her final form: the witch, benevolent in her comfort, terrifying in her almost suffocating closeness.

The perhaps most memorable spell of the collection is cast by a poem written in HTML code, creatively titled “C:\Users\marylyn.tan\UnDocuments\Queer Bodies.” The surprising form works its magic slowly through each line, the author crafting a narrative about social norms and beauty standards, scrutinising both the wider world and the queer community specifically. The code’s rigid rules and binary system enforce the feeling of oppression and authority. The easy labeling of each person raises the discomfort from the opening of the poem, “potential_queer_lovers” being categorised under lesbian stereotypes such as “Doc Martens Girl,” “National Hockey Player,” and the more unconventional yet recognisable “Bleached Pompadour Dancing Alone.” Each physical characteristic is given plus and minus points depending on how attractive and valuable it is considered, leaving no room for nuance. Tan’s vision of our world and what is considered socially acceptable is revealed a little more with every line of HTML, leaving the reader with a sinking stomach and a vague feeling of discomfort.

The monsters fought by the witch in Gaze Back are the hoarders of power and the proclaimers of acceptability and order. But this collection is really for the monsters that fight alongside her: the vilified women and girls made grotesque in their rebellious femininity, the true readers of her grimoire. Tan waves her tongue like a wand, ensnares her demons, and finally banishes them from the closing lines of her poems. Those looking for desperation and hopelessness in the face of adversity will find nothing in this collection; those looking for magic and a fierce kind of loving will find everything.

Yaiza Canopoli is a writer and photographer based in Singapore. She enjoys trying unusual drinks and begging people for visas.