Presence of City, Absence of Character 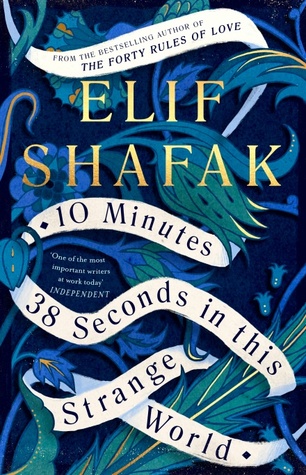 Elif Shafak is a Turkish author, minority rights activist, and public speaker. Her latest novel 10 Minutes, 38 Seconds in this Strange World has recently been published. It has also been shortlisted for the Booker Prize and, ironically, is currently being investigated by Turkish government for exposing child sexual abuse.

The novel begins where its protagonist, Tequila Leila, a sex worker, has been brutally killed and stuffed in a filthy bin on the outskirts of Istanbul. Although her heart stopped beating, her mind remains alive due to continuing brain activity after death. This time is 10 minutes, 38 seconds, during which Leila recalls her life. The book’s title reveals its premise.

In part one “The Mind”, which is constructed around this remaining time, each scene (minute) begins with a specific smell or taste. From salt to lemon-sugar, cardamom, sulphuric acid, single malt whisky. Each resonates with different memories. Through these recollections, the reader knows more about her complicated and grim childhood. A girl from a provincial town, born to a polygamist family with its patriarchal codes, subject to child molestation by an abusive uncle, and fleeing at 17 to Istanbul where she becomes a prostitute in one of a few remaining licensed brothels.

In this novel, Shafak tries to address those who have been consigned to live in the shadow of society. Her protagonist is a free-spirited girl who questions everything and does not fit in a restricted frame. However, there is not much answer to the question: how did she carry on with her later life as a prostitute? The sequence of things that happens after her arrival in Istanbul alludes to the common tropes about a downtrodden, but this question remains unanswered.

Shafak’s evocative prose alights on Istanbul. The “liquid city”, where “everything was constantly shifting and dissolving“. (136) Istanbul, alongside Leila, is a main character in Shafak novel, and plays a profound role in the history layout.  Despite the gloomy chain of events, the language is lavish, filled with meticulous descriptions of Istanbul; “city of scars”, “Istanbul was an illusion, a dream that existed solely in the minds of hashish eaters. In truth, there is no Istanbul. There were multiple Istanbuls – struggling, competing, clashing, each perceiving that, in the end, only one could survive.” (202) The novel not only gives a vivid depiction of Istanbul, but also brings some of the monumental historical events into the story to shape its protagonist’s life. The opening of the Bosphorus Bridge in 1973; which, gives Istanbulites a sense of pride and is a shift in their identity from Asian to European. There is also the left-wing student movement and Taksim Square Massacre in 1977 and its effect on Leila’s life. Shafak in this part, by employing an intricate narrating style, does a great job of illuminating Istanbul over two decades, from the mid 1960s to 1990, although “not the Istanbul that the Ministry of Tourism would have wanted foreigners to see”. (2)

Shafak’s flaw, however, is exposed by the way her characters are built, who one after another remains superficial. In the second part “The Body” everything is constructed around the idea of a place in Istanbul: “Cemetery Of Companionless”. A graveyard for social outcasts where Leila’s body had been dumped. A place no one has a name, and every grave is just a number.  We meet Leila’s friends “Five”, who just like her, have been marginalized and rejected by society; a trans girl, a dwarf, a refugee, a runaway singer, and a weak man. A set of potentially fascinating characters, each supposedly emerging to represents a distinct minority group. Shafak chooses specific type of characters, those on the periphery of society, to give them voice, to diminish the stereotype around them, but does not give them a fair chance to blossom throughout story. Their stilted dialogs do not accentuate their depth and we never grip the grief of these characters. Even the main character, Leila, seems one-dimensional. The 40 years old prostitute who has been living in a brothel since sixteen but mysteriously manages to keep her humanity intact despite of being brutalized by life over and over again. It sounds a bit unrealistic and exposes elements of unconvincing fable.

The sudden switch of POV, from Tequila Leila to an omniscient narrator, which sadly goes against its brilliant premise, is yet another bombshell. While the first half of the novel unfolds a riveting story of bigotry and female trauma in a repressed social system, the second half _ set mostly in a remote graveyard through a stormy night _ rambles between comedy and thriller. And finally, the schmaltzy attempt of Leila‘s friends to give her body a decent burial, which shifts tone from incisive at the first half to a comic one in final scenes, veers into a farce.

Despite demerits, there are still brilliant scenes in the novel, and great intentions behind writing it. It’s a shame that different parts do not synchronize for 10 Minutes 38 Seconds in this Strange World remains an unrealized concept. If Shafak refrained from the temptation of representing all different groups of social outcasts in one story, and remained –above all- a storyteller throughout the book, this novel would be faithful to its striking premise and more successful in conveying its inclusive message.

Elham Mohammadnejad is an Iranian-Australian short story writer, photographer, and holds a masters in political science.

This review was provided in collaboration with the Centre for Stories in Perth. (https://centreforstories.com/)