The craftsman and his apprentices 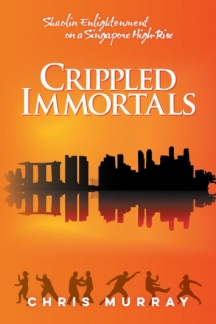 One of the key difficulties with Chris Murray’s Crippled Immortals is that, like a peculiarly intransigent fist fighter, the book is fairly difficult to pin down.

All of which is to say, there is no reason for this book not to fall apart under the weight of its ambitions. And yet, it holds together nicely, helped by an exceeding dose of charm and, happily, lyrical writing.

Ostensibly, Crippled Immortals charts Murray’s own journey from a physically slight youngster to his encounter with eastern martial arts, and ultimate immersion in the Southern Chinese art of Wuzuquan.

While the trajectory of personal growth and self-discovery provides the book with its cadence, the writer also uses these as acute points for tracking the larger, more gripping story of the art’s legendary practitioner, Chee Kim Thong (Ah Thong). Less well-developed, but nonetheless enigmatic, is the life of Murray’s own teacher, Chan See Meng, in Singapore – where the author resided for two years – a former banker, but also Ah Thong’s own favourite disciple.

A pattern of peer-jealousy runs parallel between the two generations of disciples. Crucially, the one at the heart of Ah Thong’s story dents an otherwise impeccable myth of a young boy getting involved in martial arts to fight the Japanese onslaught – knives and knuckles against firearms – escaping to Malaysia, to a life of pugilism and traditional medicine, growing into and cementing his reputation as the foremost Wuzuquan grandmaster.

As with all rich legacies, Ah Thong’s is one doomed to eventual squander, as envy, infighting, and machinations deplete the Chee Kim Thong school to a mere shell of its former glory. Murray seeks to uncover some of the deeper mysteries that occurred in Malaysia, while finding himself enmeshed in his own set of personal complications in the Chan See Meng school in Singapore.

Where his telling of the story of Ah Thong and See Meng is one that echoes with the Rashomon effect of the various characters involved in See Meng’s eventual departure, Murray’s great achievement is in being able to situate these against the gaping void that is Ah Thong’s own voice – one that is made more critical in the light of the contestation of Ah Thong’s final testaments.

The counterpoint that Murray sets up, involving those of his own peers is, by comparison, marked by a kind of caricature that, whether intended or not, leans toward the facetious. Theirs, after all, is a ragtag group whose “school” is located in various public carparks. And yet, extending out from this is the utterly moving relationship between See Meng and the author, one that transcends their various physical and cultural differences, and which evolves beyond that of master-disciple.

Some of the richest passages in the book are in the narration of these sessions, where the visceral strains of practising Wuzuquan are mixed with detailed description of sweat, humidity and bodily smells, all taking place in the Singaporean heartlands, and all along being punctured by this or the other Buddhist or Taoist philosophical elucidation that underpins the construction of each particular set of martial arts moves.

Here, Murray’s articulation of his routine travels from one end of Singapore to the other, to attend lessons with his master, is perhaps where much of the narrative strengths of Crippled Immortals reside. Fully cognisant of his roles as an expatriate (at work) and outsider to the Chan See Meng group, he neither takes on the convenient saviour-of-your-civilisation trope, nor that of the innocent-abroad. Instead, he finds a neat narrative path that is led fully by his determination to understand a heritage (Wuzuquan) of which he is a part, however temporarily, but which he is in no place to ever fully inherit. This unique place of involvement with no vested interest informs almost all aspects of the book, and does much to steer it away from mere exoticism.

To this end, Crippled Immortals is an utter surprise, and Chris Murray’s ability to capture the range of ideas and experiences, not to say personal, cultural and national histories, is an achievement of vision, and also an arrival at the height of storytelling. We should all claim this as Singaporean literature of the best sort.