A Labour of Love

By singaporereviewofbooks / May 30, 2018 / Literature & Criticism, Philosophy 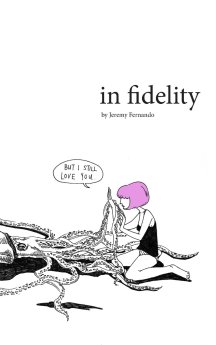 Where is the place of thought in writing, or reading? Compelled by this question, philosophers since Plato have either ventured or deviated from it in many different ways. Few, however, have paused to reflect upon the journey itself. A rhythmic blend of prose and poetry, Jeremy Fernando’s in fidelity returns to the letters or traces lying behind the trajectory of these utterances, with a meditation on writing and reading as the site of thought.

Subtle in its expression and sensitive to the voices that came before, in fidelity considers the space between reading and writing, between the known, unknown and the multiple possibilities in between. Each of the six parts in this elegant work is both a reinterpretation and representation of the place – or as the author would say, ‘relationality’ – brought forth in writing and reading. The opening essay, On Fidelity, surveys an eclectic repertoire of literary and philosophical texts to question the self or ‘I’ in the act of reading. If reading brings one into a relation with another, then such relationality begins with the affirmative ‘yes’ to ‘us’ that opens and draws the individual to the possibility of seeing, touching, and perhaps responding to the other. This is not to say that one, by reading, is inadvertently subsumed by the other; on the contrary, reading marks an attempt to attend to the possibilities of intimacy. As Fernando posits:

For, one must never forget, that even as one needs, we need, closeness for intimacy, two become one must remain metaphorical, a metaphor; where there can be a movement, a carrying (pherein) across (meta). (24)

Such a movement also draws the inseparable notions of love and fidelity into the dialogue; for how should one remain faithful to the other, if intimacy is fundamentally a possibility? With reference to Alain Badiou, who teaches that the words ‘I love you’ is a speech act addressing not the mere presence of the other, but what lies beyond and changes after the temporal encounter (25), Fernando writes that the ‘I’ and ‘you’ (in love) are never completely known to one another. In this sense, to speak of fidelity, is to not only accept or embrace what – or for that matter who – one sees, understands or perhaps, has fallen for in a particular moment, but to be open to ‘something that is only to come, something not quite yet, something beyond…’ (26).

Despite such an interpretation of reading, the openness rendered in fidelity is not an occurrence subjected only to chance. As narrated in Ce n’est pas un calmar , relationality, or the possibility of the other still involves rationality, craft and tekhnē, insofar as one must first be taught by another, in order to learn and find one’s own craft:

[…] we should try not to forget that the teacher – the pedagogue – only can guide, lead (agogos; leader) the ones (paida; boy) being taught. Thus, it is not a direct transference of information, or even knowledge, but a leading by example. (101)

It is here that Fernando proffers a thought on the love within teaching, by seeking recourse to a key idea found in the Platonic dialogues – the love that ventures forth. Just as how the love of wisdom leads one to search outside the confines of ignorance and folly, our desire for the other (a desire that expresses itself in and through the reading of every object) is in turn a departure from our own complacent and arguably more comfortable condition. In Plato’s Phaedrus, Socrates moves out into the outskirts of the city to teach Phaedrus about love. Teaching, in this sense, is to bring forth or craft this same desire within the one who is taught. This is a movement toward the margins of structure, reason, and more significantly, one’s own body (habitus).

No doubt, this practice entails the risk of falling into error and/or deception. The question of love, after all, is shrouded in ambiguity; for how do we know we love a person for who s/he is, or what s/he is? In other words, where is the place of truth in the other? It is possible to surmise that in fidelity is not a work of philosophy, if we take the latter to imply an arrival at a particular immutable truth. Rather, it may be a reading of the remains – or as the author quips, ‘squid ink’ – that we leave behind in writing, as what lies beneath the structure of thought are nothing but its traces, letters and words that open the text (be it philosophical or otherwise) to possibilities that it can never quite call its own. The indelible charm of in fidelity, therefore, lies in how it approaches the relation of writing and reading as a place of thought, and more profoundly, a labour of love.

Joel Gn is lecturer at the Singapore University of Social Sciences. He writes about aesthetics, technology and East Asian popular culture.