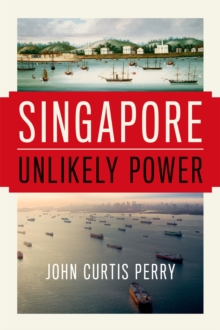 Singapore spent 2015 celebrating its jubilee as sovereign state, an event overshadowed by the death of its first prime minister, Lee Kuan Yew, whose People’s Action Party (PAP) has steered the island-nation’s development since independence in 1965. As the nation bathed in a collective nostalgia, Singaporeans turned a blind eye to the less palatable aspects of Mr Lee’s tenure, preferring to focus instead on the nation’s extraordinary economic achievements under his stewardship. Milestones tend to fan nostalgia but often cloud judgment.

To be sure, the economic achievements of contemporary Singapore are compelling, and John Perry rightly lauds the “inspiring story” of how “a mere dot within a vast Malay world” rose to global maritime prominence (3). Singapore’s commercial relevance and importance has long been tied to the maritime sea lanes that support it. At the axis of two oceanic trading basins, Singapore had served as a regional trading hub in the highly fluid and mobile Malay maritime world well before the European presence in Asian waters.

The birth of modern Singapore, in 1819, coincided with an oceanic revolution that cemented Britain as the 19th century hegemon. Curiously, in 1703, Britain turned down an offer of Singapore island from the Sultan of Johor. Over a century later, Thomas Stamford Raffles and the East India Company muscled their way in and established a free trade port that serviced the surrounding region. All kinds of people came in search of fortune, but it was southern Chinese sojourners who outnumbered everyone else, transforming Singapore into a Chinese colony as much as a British one. Today’s “local” Chinese are descendants of those early migrants.

John Perry devotes considerable attention to the colourful chorus of peoples who formed the nucleus of Singapore society from the early 19th century until the fall of Singapore in 1942 to Japan, which sounded the death knell of British rule not only in Singapore but across Asia. The eclipse of British rule was not immediate, however. Nor did Singapore’s political pioneers embark upon revolutionary action to end colonial rule; in fact, the shift from colony to nation was smooth, and British and ANZAC forces garrisoned the island long-after 1965, with the final New Zealand military drawdown in 1989. The baton was then passed to the Americans who have maintained regional security ever since.

Perry invokes Kant’s injunction, “Don’t think, obey”, to characterise the nature of successive Singaporean polities: a Sultanate; a colonial possession; and a one-party state today in all but name. Ever since it became a sovereign nation in 1965, Singapore has been ruled by a single political party. The PAP has created a national gospel of a vulnerable state whose existence, stability and future depends wholly upon its efforts. It produces meanings, purpose and interpretations that are often dubious and omit less flattering elements of the modern Singapore story.

After 1965, in the name of economic progress, Lee Kuan Yew quickly spurned (genuine) political democracy to create what amounted to an authoritarian state that perpetuated some of the least attractive features of the colonial heritage. Like Raffles, who called Singapore “my colony”, Lee would leave nothing to chance or the electorate; once he had achieved a firm grip on power, he was loathe to surrender it. As Lee once said: “we decide what is right”. To his mind, certainty was the antidote to vulnerability.

Even though a lot has improved in Singapore, Perry is worried about its lack of political freedom and development. He explains that while Singapore has a democratic structure – elections, parliament, political parties – it is bereft of democratic culture. The stifling embrace of the Singapore government has in turn blunted entrepreneurial innovation and artistic inspiration. “No original product ‘Made in Singapore’ has yet achieved global presence” (244), Perry decries. He locates this absence in the fact that Singapore’s political mandarins believe the arts in Singapore are something to manipulate and exploit rather than pursue as an expression of culture. “Government’s motivation has been commercial not aesthetic,” Perry says, “with emphasis on the collectivity not the individual” (246). If economic progress is to continue, however, Singapore will have to mould an environment conducive to the generation of good ideas and new ways of doing things.

For all this, while I enjoyed Perry’s Singapore story, I take issue with several interpretations, such as the assertion that modern Singaporeans understand Malay more than any other of the official languages, or the constant invocation of Singaporean in referring to those who lived on the island in the pre-1965 period, and the claim that Lee Kuan Yew never expected special service. But, these aside, Perry has delivered a thought-provoking and even-handed overview of one of the world’s economic success stories. The Singapore Story is still being written.