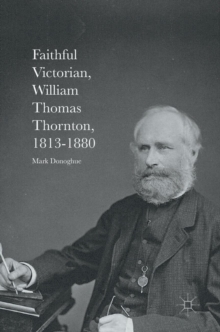 William Thomas Thornton (1813-1880) was a notable Victorian social reformer, economist and imperial administrator. Like his friend and patron John Stuart Mill (1805-1873), Thornton derived his income and economic security from the East India Company, which he joined in the 1830s. He hailed from a family with imperial service traditions, while his mother, Sophie Zohrab, was Armenian from a family which fled religious persecution in her own country. Whether this link to an oppressed ethnic group gave Thornton a feeling for the underdog is not clear, but he certainly grew into a major critic of existing social arrangements in India, Britain and Ireland. About India, he championed the opening up of bureaucracy and administration to natives, though he saw this not as a step towards self-government, but as a strategy to make the British Empire more acceptable to the India upper middle class. However, his work was particularly influential in two other areas: the championing of peasant farming as a way to address rural poverty, and the ‘refutation’ of the theory of the wage fund. His Plea for Peasant Proprietors was published din 1848 and had a considerable influence from the start, with J.S.Mill taking up his ideas and a number of influential politicians and large landowners concurring with Thornton and lauding the importance of fostering providence and contentment among the rural poor.

The book contributed to a major reassessment of the contemporary understanding of what progressive farming might be about. The standard view stressed the economic efficiency of large estates. By contrast Thornton emphasised the way small-holding enriched a country’s social capital, creating stability, encouraging foresight and a prudent lifestyle among the farmers, and in this way contributing to the education of the labouring classes as a whole. At the time, agriculture was the largest employer of labour in the United Kingdom, and was of critical importance in Ireland. Devastated by the Great Potato Famine in 1845-50, and then shaken by land agitations among tenant farmers anxious for security of tenure, Ireland was to become the area where ideas and policy recommendations similar to those envisaged by Thornton were to receive fullest implementation – albeit only after the economist’s death.

Thornton’s other claim to intellectual eminence was through his study of industrial labour and the role of trade unions in bringing about better wages. The general view was that wages were defined in a rigid and ‘static’ way by demand and supply: there was supposed to be a limited amount of capital which could be used to pay for wages, the wage fund, and this was not affected by industrial action. However, from the 1850s the so-called ‘new model’ trade unions had been securing a widely respected position in the view of economists and social reformers, with J.S. Mill adopting an increasingly pro-union stance. In a Fortnightly Review article in 1867 Thornton criticised the wage fund in the ‘static’ version articulated by Henry Fawcett – a disciple of Mill’s and the Professor of Political Economy at Cambridge. Then in On Labour (1869) Thornton challenged the wage fund theory as a whole, arguing that there was no set amount of funds at the employers’ disposal out of which wages would be paid. The latter depended instead on bargaining, and the unions had a key role to play in securing the best wages they could at any given time.

Donoghue examines the way Mill had privately encouraged this development, which he then publicly welcomed in a famous ‘recantation’ of the views he had held on the subject, in an essay which appeared in the Fortnightly Review in 1869. Donoghue maps this important intellectual development in great detail and also explains the limits of Mill’s change of mind and the extent to which he went to remind workers that, in bargaining for better terms, they ought to consider the potential damage they might inflict on other trades and on the economy as a whole, if wages went up to the extent of forcing employers to relocate their business abroad. In short, though the ‘static’ form of the wage fund was abandoned, economists still believed that industrial action could not push up wages indefinitely without undermining employment and the very viability and economic prospects of their trade. Nevertheless, it was a significant new departure in attitudes to trade unions, whose role was effectively incorporated both in economic thought and in national legislation (with the passing of the 1871 and 1875 Trade Union Acts).

Eugenio Biagini is Professor of Modern and Contemporary History at the University of Cambridge. His research has focused on Britain and Ireland since the 1850s, and he has written extensively on the history of liberalism and democracy.