By singaporereviewofbooks / May 26, 2016 / Literature & Criticism, Poetry 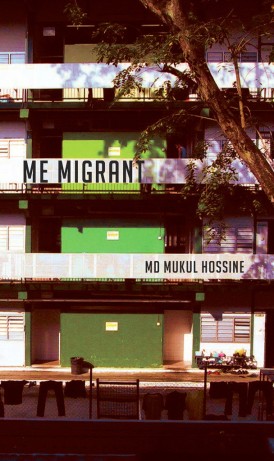 The first two instalments of the Migrant Workers’ Poetry Competition, held in 2014 and 2015, have brought into focus an entire community of writers who previously escaped the attentions of Singapore’s wider reading public.  The Competition represents an essential shift towards integrating the rich domain of its participants’ experiences and traditions into our literary landscape, and celebrating their common ties – and unique contributions to – our physical and social terrain.

Ethos Books’ laudable decision to present a full-length collection of Md Mukul Hossine’s work is an important step in the same direction, and also an astute choice in showcasing the astonishing work of a talented, transcultural young writer. Mukul was one of the Competition’s participants in 2014. At 25, he is also one of Ethos’ youngest published authors, and already has a novel and a poetry collection to his name in Bangladesh. This collection, his first both in English and in Singapore, is a milestone in his literary development as well as ours.

Thirty-five of Mukul’s poems are presented here, translated from Bangla with help from Fariha Imran and Farouk Ahammed, and transcreated by Cyril Wong. As Wong describes in his Editorial Note, these English versions are shaped both by the “colloquial directness” of Mukul’s writing. The opening pieces are honest but finely-tuned explorations of Hossine’s loneliness and homesickness – “Birds fly across a sky of dreams”, he writes, “They mightn’t locate solace, yet they carry on”. Longing for companionship (“Any life without love / is that of an immigrant”) and family (“I can’t bear it, mother. / Call me khoka, just once.”) is underwritten, page after page, by a deep sense of rootlessness: “Don’t know where it is I’m lost / Don’t know the destination”.

As the volume progresses, we gain a fuller picture of Mukul’s life in Singapore. Spending Eid abroad prompts Mukul to remember his “Father’s deep sigh, brother’s emptiness / Sister’s amazing smile” – and to compare the comforting sibilance of the family’s close presence with “a life in silence” as he knows it here. In another piece, sounds of the night trigger questions as Hossine lies awake: “Are they laughing out of happiness / Or crying out of sadness?” Hossine’s voice is always probing, always searching: “Why sky is crying / did you know”, he asks, then echoes his own question: “Why clouds are meeting // Oh brother did you know”?

In the middle of the book are contributions from student volunteers at the HealthServe community clinic where Mukul serves as translator and befriender. Here, Chen Ting An’s piece, “等待的背后” – presented in Mandarin and English translation – stands out for its deep empathy and formal accomplishment. The poem records the story of “Mr. Chen Chang Ming”, an injured Chinese worker who sought medical help at the clinic. Despite the formal rigidity of its Song poetic structure, Chen’s story loses none of its pain or hope: “Besides waiting, I can only wait / I tell myself to endure everything / Once the results are out / Another door will open for me”.

We return to Mukul’s poems in the final section of the book, entitled “Songs of Praise, Songs of Life”. The focus here is no longer on Mukul’s personal or familial circumstances, but on the physical and experiential distance between Bangladesh and Singapore. Playing on the idea of the latter as a “garden city”, the line between the two places blurs as he alludes to “a village encircled with greenery” or the “pine tree near the gate”. Such landscapes are reminiscent both of his hometown (“where mother’s love / is the whiff of ripened crops”), and the “green forests, blooming flowers” of Singapore. “Is the rose tree enlarged / by its own branches?”, he asks. “Do you feel / my touch from the touch of another?”

At the collection’s close, Mukul speaks to both Singapore and Bangladesh directly. Fascinatingly, his conception of these places is hardly characterised by their differences from each other. Instead, they are defined by a sense of cosmopolitan openness, and their permeability to a transcultural traveller like him. Addressing Singapore at her Golden Jubilee, he writes, “your inner light / joins you with the world”; likewise, he tells Bangladesh, “I fix you every instant everywhere”. Despite the many barriers he has faced in moving from one country to the other, it is Md Mukul Hossine’s ability to look past their boundaries – and his expansive vision of humanity – that finally lends his voice its most distinctive quality: “I want to find love this far from home / I want to live alongside the helpless”. This is a passionate, big-hearted resolution, and readily draws us in: “I want to be king of the poor” – yes – “King of the poor”.

Theophilus Kwek is the author of three collections, They Speak Only Our Mother Tongue (2011), Circle Line (2013) and Giving Ground (2016). He is the current President of the Oxford University Poetry Society.