How many voices are in here? 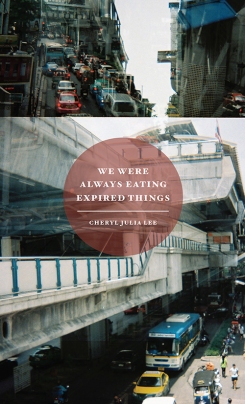 Wallace Stevens once remarked on the inevitability, the necessity, of “the transposition of an objective reality to a subjective reality” in poetry and identified the relationship between “reality and the sensibility of the poet” as rooted in precisely this transaction. The shift from the messy life-force of one state to the potent, achieved, form of the other represents an enormous shift – one that frequently requires many years of endeavor. It is therefore genuinely surprising to find in the work of Cheryl Julia Lee, a poet who is new to book-length print, continuous affirmation of the world having been transformed into patterns of achieved images. The traces of the world from which these images spring are, of course, ever-present, whether in the domestic conversations, the familial presences, or the poet’s lethal observations, but the way that the substance of the world is transformed into shaped poetic presence is what repeatedly stunned this reader.

For example, in “Forehead”, the speaker reconstitutes the torturous taunting of school children about her forehead – “I was balding, / call me a walking solar plate” – into

the vastness of the night sky. It tells you
what you can imagine is greater
than what you can see, hear taste and touch,
and it is wide so there is enough space in your head to hold all the dreams
your hands are still too small to carry

via the comforting balms of her father – and the world is partially redeemed. But before the children’s taunting and the father’s solution are narrated, the poem had opened with a more crucial poetic shift that is only retrospectively evident:

My forehead is so wide
you could serve breakfast
on it and still have space
for desert.

The voice of the poet has already let it be known that she had taken ownership of the world of experience – it has already been contained in an image by achieving a kind of acid-tongued comic distance, controlling the pain, in advance. Only then do we read of the event, after we know the voice has taken control, however bitterly earned. But, then, almost casually, the closing line again prises open the wound – just a little –to disrupt her own illusion of control – “But lately, I have been cutting bangs” – and forces us, for the third time, to re-revisit the experience. This is deceptively simple but the poetic eye revolving around the experience in such subtle ways is precisely what privileges the voice above the event. Or rather, voices because there are several presences here, standing above the event, finding ways to speak, learning to remake the world – this is not the mark of a young poet.

There is much more that startles one about the collection – like the breathless, pulsating observations of “Take Your Shoes Off Before Stepping Inside”, particularly in the long second stanza, in which

– before we visit the Mekong river, the Milky way, the stories of the Yorta Yorta people, and invisible cities that stray across the poetic gaze. The exuberance is extraordinary, the range even more so – no anchors to the earth in view. The images gather in swarms, relentless, potent, but they are always clear – rare in young poets – even when the subject-matter darkens, as with the startling “They Tell Us The First Time We Make Love It Should Be With Someone Special”, in which the speaker, after apparently making love to someone not at all special, aches “to be laundered / so the next occupant / could begin with fresh sheets”, again tangling herself in surprising images while remaining perfectly clear and filled with cool-eyed certainty.

Many first collections, this one included, are written over several years, and therefore frequently seem like disparate gatherings. We Were Always Eating Expired Things freely mixes forms – prose-poems, lyrics, diary-like observations, and switches voices (father, daughter, anonymous speakers), and yet there remains a curious interweaving of elements that makes the poems in the collection feel as if they have emerged from similar motivations. Homes, houses, pathways, bread-crumb trails, exit routes all proliferate in one way or other in many poems – all speaking of a central thread of fascination. So too with a series of shadow lover-figures, who remain just out of view, refusing, or not permitted, to come into focus. This is also a collection about the fraught complexities of family, and some of the highlights of the collection involve glimpses into the mad domestic moments that have been captured in the poet’s phrases: “Our tongues broke down in that house. We went back to sounds … And the silences in-between grew into walls and the names we loved became the names we didn’t call.”

We Were Always Eating Expired Things repeatedly wears its nerves on the outside – and what the nerve-ends detect finds expression in the remarkable images. The world is witnessed and then comes back to us via these poems as a transformed, memorable poetic record. Lee’s poems don’t shout and scream like some lesser attention-grabbing work but in their controlled, fearless observations, in their clarity and subtlety, in their artistry, they have quietly and firmly announced her arrival.