Retargeting the scope of urban enquiry 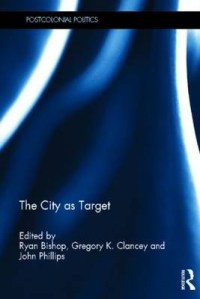 “The fantasies of the decline of Paris are a symptom of the fact that technology was not accepted. These visions bespeak the gloomy awareness that along with the great cities have evolved the means to raze them to the ground.” [Walter Benjamin, Konvolut C7a, 4][1]

Published in 2012, The City As Target, as the title suggests, ostensibly addresses a subject that is relevant to a post-9/11 milieu. As the 2013 Boston bomb blasts and subsequent lockdown affirm, this collection of essays remains timely, as the spectre of urban terrorism evidently shows no signs of diminishing. The various arguments in this volume collectively emphasize a historical consistency to such attacks, reiterating the persistence of structural tendencies that pre-date World War I which define and shape the modern notion of the urban. As the editors suggest, contemporary urban terrorism has its conceptual and material antecedents in fundamental logics and practices that are produced by, and through, processes of modernity. Inscribed in modern urbanity are mechanisms or infrastructures of violence that generate and perpetuate construction, circulation, displacement, and destruction. These infrastructures also form the architectonic conditions of thought itself, encompassing and extending beyond current military and geopolitical concerns. Thus, while the notion of urbicide is explicitly discussed in The City As Target in terms of cities being physically targeted for obliteration during actual war or conflict, the essays in this volume suggest ways of conceiving the city as a model or an imaginary. Here, the urban is presented as a condition that is predicated upon intensifying practices and processes of preemptive projection and destruction, which are calculated upon the axes of risk and security.

The condition of ‘emergency’ is presented as an organising heuristic throughout the essays in this volume, which employ the notion of targeting as a productive trope for analysing the urban. Arguably, the 20th and 21st centuries have been characterized by a continuous state of exceptions, brought into effect by: global conventional and insurgent war; the enactment of martial law by imperial states upon colonies, and governments upon their own domestic populations; the impact of political and economic crises; and widespread damage wreaked by natural and manmade technological disasters. The notion of the target is discussed in some essays in terms of its most literal manifestation — the military target. Eyal Weizman’s “Thanato-tactics” examines the Israeli state’s necropolitical reliance on targeted assassinations as an operational strategy to maintain occupational control over Palestinian land and population, while Stephen Graham’s “Theme Park Archipelago” details recent developments of the military-industrial-entertainment complex that include the establishment of simulated cities by the military as urban warfare training sites, constituting a system of “violent theme parks for practising urban destruction, erasure and colonial violence targeting real, far-off cities” (92). Tjebbe Van Tijen’s photo essay taken from his Unbombing Project explores the impact of aerial bombing as a military tactic of targeting the civilian population. Nick Cullather explains how US Cold War counterinsurgency military strategy in Asia had relied on the notion of the village to schematise and enact epistemological control over ‘an unknown world’ of the Asian social landscape. [2] Providing an account of the development of the ‘strategic hamlet’ in Vietnam and the community development programmes by the Ford Foundation in India as modes of rational modernist urban planning applied to the rural context, Cullather relates these processes of modernisation as those which targeted the local populations and rendered them as collateral in military struggle ­– processes which continued to inform US operations in Iraq in 2003.

But, as the volume collectively argues, we do not need to go to war to find violence in the modern city, as the logic of targeting forms the basis of urban conceptions, representations, and interventions. Many of the essays engage in theoretical and figurative dimensions of targeting even as they discuss its material aspects, articulating a close relationship between projective thought, vision and physical execution that is embodied in the trope of the target. Examining five urban designs submitted in the wake of the Great Fire of London in 1666, Shiqiao Li discusses the emergence of the notion of the transparent city that is grounded in market or scientific principles. He traces the systemic logic of the transparent city to epistemes of exposure, openness and power founded in the Greek polis, accounting for the creation of lines of sight and the formation of the grid in the design of modern cities. As Li reminds us, cities are often fashioned through destruction or projections of destruction, whether accidental or purposeful. Gregory Clancey notes how the house becomes a mode of targeting the city in the deconstruction of American cities under the New Deal, as it becomes decontextualized from the city under the name of ‘urban renewal.’ As he argues, the emergency act of clearance becomes an urban technology, a productive means of mobilising populations from “blighted areas”, which eventually led to the hollowing out of American cities and the rise of American suburbia upon the creation of ‘open space’. Irina Aristarkhova and Suzuki Hiroyuki offer contemplative accounts of two cities – respectively, Moscow as Fortress, and Tokyo as a city traditionally wrought by natural disaster, and one that is quickly becoming a city of ‘island universes.’[3]

As the essays emphasize, cities are discursive entities that are scripted through a variety of media besides the material of buildings and infrastructure, often through colonial master narratives – which invite counter-readings. Sharon Traweek explores the notion of scripting qua history in the creation of science cities in Japan, noting a parallel between apparent gaps in local histories of science and the tabula rasa character of Tsukuba Science City. Rajeev Patke provides an analysis of the affective dimension of the diasporic postcolonial condition of the targeting and targeted migrant through readings of Caribbean poets such as Eric Roach and Amryl Johnson, while Pal Ahluwalia offers a reading of ‘subaltern architecture’ in the form of the refugee camp. Examining how the market in Kimbumba camp became a space that enabled Africans to express their national identity, Ahluwalia offers the market/bazaar as a site of resistance, instead of one that is usually Orientalised by the Western colonial imagination. Robbie Goh’s critique of the 2003 Rugby World Cup in Australia highlights the competitive techno-capitalist logics at work behind such highly-profiled advertised events that involve the global city, where the targeting of valued bodies in the multinational ‘rugby economy’ circuit follow the logics of the targeting of workers considered as the global elite.

Given the overwhelming evidence mounted in this volume on the necropolitical dimensions of the urban condition, what can we make of the city and its future? Several essays in this volume offer optimistic theoretical prognostications of what urban politics might look like by retargeting the city in various ways – Nigel Thrift argues for a practical affective politics of hope based upon our acceptance of alienation and misanthropy as part and parcel of our increasingly militarised urban experience. John Armitage calls for an “Imaginist City”: “a real if absolutely deterritorialized city in which global citizens cross a threshold where they can and do produce their own nonviolent places for peace activism in the age of infinite global war,”[4] where the same techno-scientific weapons used by the US military-civilian elites can be used by thinkers and practitioners for establishing peace. Jordan Crandall offers a schematic of the emergent program that serves as a manifesto for an experiential mode of tactical resistance against system mechanisms of control, while Verena Andermatt Conley sees intellectuals and critics helping to invent new spaces[5] and individuals having the potential to construct and reconstruct the city, with eco-urbanism as one potential mode of political agency. These essays are more useful as critiques and reminders of technological capacities and the possibilities of reimagining or reconceptualising the contemporary city whilst acknowledging its infrastructural and political realities.

The essays in The City As Target propose the city as a violent technological condition, challenging other accounts of urbanism that usually emphasise processes of socio-economic growth, or aesthetic analyses of urbanism that affirm the city’s spectacular character. Even in their more hopeful articulations, the essays reveal the city as an inescapable site of violence and contestation, in the same vein of Deleuze’s claim that “[i]t’s not a question of worrying or of hoping for the best, but of finding new weapons.”[6] In the acknowledgment of the city’s capacity for repair and maintenance,[7] the volume attempts to recalibrate our often modernist beliefs in the city as the conceptual horizon and material landscape of utopia and catastrophe. It also attempts to introduce questions of responsibility and possibilities of agency to the urban landscape of intensifying surveillance and systemic control.

[2]Dean Acheson, quoted by Cullather in “ ‘The target is the people’: representations of the village in modernization and national security doctrine,” The City As Target, (New York: Routledge, 2012), 282.

[5] “The city as target – retargeting the city: French intellectuals and city spaces,” ibid.,144.

[7] Nigel Thrift, “‘But malice aforethought’: cities and the natural history of hatred,” The City As Target, 21.

May Ee Wong is a PhD student from the Cultural Studies Graduate Group in the University of California, Davis, with a Designated Emphasis in Critical Theory. Currently examining contemporary urban design and ecology-related and complex systemic discourses of the city, her research interests include critical conceptions of the urban and the built environment, history of technology, critical theory, cultural politics, visual culture and aesthetics, and militarised logics and culture.