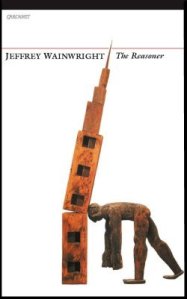 The world of Jeffrey Wainwright’s The Reasoner tends to be one underlined by controlled and self-assured impulses, whether the poems are dealing with generalised subjects and people or those drawn directly from his own sphere of experience. Reinscribed into the realm of writing, of a linguistic apprehension that likes to consider itself accomplished, completed, these subjects become possibly banal, and the poet readily accepts them as such.

In reality, the figure of the Reasoner implies, there is not much comfort to be found in the high-flung intellectual life; for the human mind, delineated by an awareness of the inevitability of its own limits, perhaps the best option is to absorb, and be absorbed by, the circumstances that surround us, as the 95 poems that make up the volume are wont to do.

There is no dominant “idea” in this collection, and that is largely its point: that the myth of stable meaning is insufficient to hold together a world as complex and unwieldy as the one inhabited by us, the tribe of complexity and unwieldiness:

Thus we are pinned, half minds in a half world

while everything around us is at work,

the banksia, or as it might be, miniature rose,

the near bodiless spider angling,

At all times, the speaker – or assorted speakers – casts his eyes warily at suggestions of abiding “truths”. In fact, the first quarter or so of the collection abounds with simple questions with no simple answers. And yet, in the attempt to reconcile the larger unity that he has in mind, Wainwright is simultaneously drawn to and repelled by the central question of the modern condition: why not?  We see this in a poem such as “25”, where he remarks upon “Another ant, another purpose for its tentative forefoot. / But I know you would not have me turn away.” To a sentiment such as this, the poems in The Reasoner open up the discourse of possibility, of an unembarrassed celebration of equanimity.

The speaker in The Reasoner is inclined towards exposing a strong sense of the modern attitude, while admitting an affection towards it, and Wainwright fleshes this out with much confidence. Even the most spare of these poems still appear aligned with the loose trajectory of the collection – “Piero knows that even he does not see everything, / this is just one of many seeings / and without shadow he would be blind.” (“30”). And if the poems speak from the seeming shallowness of aphoristic constructions, they are nonetheless the product of meditative depth.

As the collection unravels, there is a clear sense that there is method to the gladness. Wainwright provides a ready template for the affectations of contemporary sensibilities:

find me one person

in any bus queue, or indeed anywhere

who will deny that there’s injustice

in this whole wide world of freedoms

This may feel regressive, even limiting, but it can also open up to the universality of a cultural mindscape that has become, to a point, global, if unfortunately homogenised.

The collection has no pretensions to grandeur, but what lures us in, especially on the initial encounter, is how alluring Wainwright’s concerns are; how inventively his set pieces mirror the world outside of poetry; and how he has given life to a space populated by critical curiosity, able to sustain itself against artifice and contrivance, all by way of accomplished lyrical thrusts.

This is not to say that The Reasoner’s lacks ambition. Wainwright is content with framing his topics, large or small, with equal measure of attention and significance. And in the astonishing centrepiece of the collection, poem “57”, his mastery is on display in full glory. The poem explores the narrative reaches of the Rashomon effect, using the remarkable source material of Saint Maximilian Kolbe’s beatification:

These are not more cases of the grand indifference

but some who just knew that this is only the first world,

fretted and sick, and another is, or will be – no matter which –

And then later: “Or in another version”; and yet more: “it must be possible to tell a story.”

Wainwright’s perspectives, while preoccupied by personal anxieties, are continually governed by structures of exteriorities. There is a marked awareness that the public sphere and its encounters dominate personal experience, even define it – although he exhibits no urgent concerns about implied superficiality that attends to such a condition. To this, there is no obvious sense of disillusionment because the poet has replaced the sort of scepticism, discernible in writers of the last century, with a kind of critical objectivity that is more evenly tempered. Indeed, histrionics and anguish – even in the Kolbe poem – would feel like overplaying a hand in the context of the collection. The poems are, for lack of a better word, reasonable. And Wainwright’s poems resonate more effectively as a result.

The Reasoner, for all its clear-mindedness, is neither rigid nor particularly systematic in its summation of the world. Therein lays its wisdom, for which we can be thankful.

(this review first appeared in Volume 13, Number 1, 2013 of Moving Worlds: A Journal of Transcultural Writing)