The Reader as Neophyte Mystic 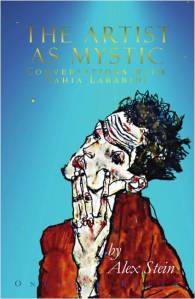 In a way, the book’s subtitle, “Conversations with Yahia Lababidi,” is misleading. Ostensibly, the book comprises Alex Stein’s dialogues with Lababidi on the literary luminaries Franz Kafka, Charles Baudelaire, Friedrich Nietzsche, Rainer Maria Rilke, Vilhelm Ekelund, and Søren Kierkegaard. But by casting the meditations on these artists in the form of conversations, the book makes its readers aware not only of their position as a listener to these discussions, but also of their need to respond to what is being discussed. Hence The Artist as Mystic does not only contain Stein’s conversations with Lababidi, it also engages in a dialogue with its readers, inviting them to participate in these conversations.

It is no surprise, then, that Stein calls the reader “[f]ellow traveler,” and so leads us on a journey in which, in the words of Lababidi, “the dead shall teach the living” (x; ix). And what shall they teach? Among many things, that the living is always constituted by the dead, for “no one. . . has an individual destiny more important than his communal destiny,” and in that sense, the living is always communing with the dead, with all who have gone before us, whose lives go on shaping ours, whether we know it or not (viii). The book is, of course, acutely alive to this; among other terms, Stein’s conversations with Lababidi have been referred to by the latter as “séances” (x). In these séances, we have Lababidi talking about Kafka, Baudelaire, Nietzsche, Rilke, Ekelund, and Kierkegaard, “the spirits (those ‘literary masters,’ as [he] calls them) with whom [he has] commune[d]” (x), and these literary masters themselves communed with their own masters: Ekelund “turned to Nietzsche ‘for learning, strength and solace’” and thus “Nietzsche taught him that it is possible to be a great poet of ideas writing in prose” (56); Rilke learnt from Rodin “the ethic that. . . [t]here is only work” and “a way to see newly” (52); and “Baudelaire thinks. . . his own spirit literally a continuance of Poe’s spirit” (29).

What can also be seen in these conversations is the communion of the living with the living. Stein acknowledges that, as he was working on the book, “I could hear Yahia’s voice very clearly inside my thinking, speaking out my thoughts,” and he also brings to these conversations his communion with himself, for he admits, “All I can bring to any proceeding. . . is my witness. Which must necessarily include my witness of myself” (x; ix). Hence the sequence of communion in the book really runs thus: the reader reading Stein reading himself reading Lababidi reading his literary forebears, who themselves have read their own masters. In other words, we all of us partake of a communion whose sacrament is “the Manna of influence” (29).

I say “reading,” but it is, as suggested by Stein, also “witnessing.” For we bear witness to what we read, and in witnessing, we are called to testify, to respond to what we have read. In reading The Artist as Mystic, we are ourselves implicated in the chain of witnesses endeavouring to bear testimony to what they have glimpsed, and our testimony—our response to the book—may in turn be said to be conditioned by the writers’ way of witnessing.

And what have they witnessed? Lababidi says it is the “sacred ‘there-world’” that Kafka has encountered (Stein 14); for Rilke, the “terrifying” angels lead him to realise “beauty is nothing / but the beginning of terror”; Ekelund calls it the “treasure” he needs to hunt for, in order “to prove [his] right to inherit” it (qtd. in Stein 53; 55). Stein himself calls it “this great, calming beauty,” which when it comes close to him evokes the sense that “everything was perfect and nothing else mattered or could matter”—but whatever it is called, it can only be glimpsed, for Stein observes that more often than not “[i]t was not within reach. Just that occasionally, for reasons unknowable, it came within reach” (9).

There may be no sure formula for catching a glimpse of the sacred there-world, but there is a way of not precluding the possibility of one’s encounter with it. In comparing artists with mystics, Lababidi notes that “before approaching that mystic condition, one must first accept the diminution of (constructed) self, the dissolution of the personality” (Stein 39-40). Thus he points out that “[a]ll of these [artists’] lives, all of these sometimes protracted convulsions of living, contain something of a renunciation, a continual giving up, or self-limiting, at their core” (2). And the purpose of this kenosis is, ironically, self-fulfilment. It appears these artists are called to a vocation of renunciation, to give up as much as possible their own selves and their own selves’ longings, so that something else and something greater might come through, and be enacted in, them. In emptying themselves, in order to avail themselves to a greater calling, the artist-mystics paradoxically become more fully themselves, more than they actually are, as “the wood find[s] itself a violin,” an instrument of and for art (2).

In reading these different accounts of the struggles of self-transformation, the readers of The Artist as Mystic may, in finding an affinity between their own grapplings and the artists’ struggles, be inspired to likewise undertake the vocation of “self-work” (Stein 20). If The Artist as Mystic is able to lead its readers to see themselves and their selves’ struggles in the writers and their struggles, and, in such an imaginative gesture, open up imaginative possibilities for self-sculpting, it would have accomplished the task of making the reader alive to the Rimbaudian thought: “I is another” (qtd. in Stein 1). In identifying with the otherness of these sculptors of the self, readers may then aspire toward their own task of self-transformation, to be more fully realised, more than themselves.

The writers’ “rage for transformation” is what fuels their voyage toward inwardness, toward the there-world. In an analogous manner, The Artist as Mystic leads us, through its explorations of the lives of the artists-mystics, back to ourselves, to see ourselves anew (Stein 42). For The Artist as Mystic does not simply position its readers as passive listeners to its conversations. Rather, it invites us to personally discover and actively respond to the writers Stein and Lababidi talk about, and in so doing, encourages us to undertake our own transformative journeys. If the book stirs its readers to seek out the “literary masters” to commune with them, if its conversations prompt us to sit at the feet of these artist-mystics and allow us to discover them as writers “in whom one can see one’s own possibilities,” if these conversations inspire its readers to explore, even commit, to the difficult but fruitful task of self-work, The Artist as Mystic shall have done its work (x; 58).