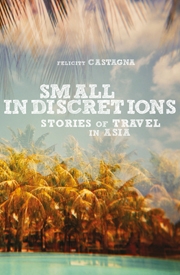 Many of the stories in Australian writer Felicity Castagna’s first collection, Small Indiscretions, occupy a tantalising space, one imagines, between fantasy and autobiography. In almost every case the protagonist is, like Castagna herself, a slight and quiet young woman. In all cases she is wandering through Asia, white and normally alone, variously hitched to men who likewise find themselves at odds with their current landscape.

The renaissance of the short story as a popular literary form is producing a great deal of very interesting work, and it’s also providing young writers with a much more accessible platform from which to launch their talents. Castagna’s own talent emerges in this tantalising book, slowly but quite markedly, rising up by the fifth story, ‘Learning Indonesian’, and striking the reader with a subtle despair and a palpable anxiety about the way a white Australian engages with her Asian neighbours.

Each story in the collection is set in a different Asian country, and the reader is normally plunged immediately into the torment and psychological drama of that story’s heroine. In the collection’s eponymous story, for example, an elderly Australian woman and her husband feel forced by the cultural restrictions of Brunei to behave badly and childishly, and in the story ‘Transition’ a feckless young teacher escapes to Hong Kong only to meet one of her old students, who manages to seduce her in an offhand and mysterious fashion.

Part of the pleasure, of course, in reading such a book is that almost every writer has, at some inspired point along an extended journey, decided that they too are capable of producing just such a wonderfully Maugham-esque collection. And part of Castagna’s cleverness is in acknowledging this writerly envy, placing her heroines at cafes in Vietnam or Laos where they write stories and tell lies about themselves, making the decision to fictionalise their encounters rather than simply record the facts in a journal.

Castagna’s characters are far too complex to be the expected collection of post-colonial angst-inducers, compounding the suffering of the people they are visiting by insisting on their own sense of lack and misery, or worse still claiming some kind of empathy. They are instead people you would recognise, young university students newly released from private schools who are unleashed in Southeast Asia and left to negotiate cultures and histories they simply know nothing about. One such creature, attempting a clumsy seduction of a Burmese girl working at his backpacker’s lodge, voices the calm half-confidence of that ignorance. Nodding in feigned understanding at her reference to conflict, he barely registers his shame at not knowing, because: “He’s sure this is something he’s meant to understand. It has something to do with some war he’s seen on the news.”

One or two of the stories are commentaries on the voluntary visibility that marks much modern tourism. In ‘Making Stories’ a bored young woman travels around Hanoi on the back of a motorcycle, aware of the constant stares and comments from passersby, but awash too in the ironic detachment that results from such intense attention. If everyone stares at you it is much the same as no-one staring at you, and some of the characters are consumed in the act of this loss of identity – the removal from potentially complex character to broadly and swiftly drawn cartoon, a whipping boy for everyone else’s desires, frustrations and resentments. This most often plays out sexually, and in several stories young Western women are contemplating, or engaging in, strange dissociated affairs and flirtations with “local” men.

Travel tales, which we’ve come to expect to be depicted as memoirs, are fictionalised with depth, subtlety and feeling by Felicity Castagna. The stories are spare, simple, and for me brought to mind the early work of Tobias Wolff. In their pain and their self-consciousness about the act of escape, her characters are particularly authentic echoes of several generations of lonely backpackers immune to their own privilege, treating Asia like Marie Antoinette did her L’Hameau de la Reine. Increasingly immersed as I became in her fictional world, I recognised too a shared impulse to drop the assumed responsibilities of generations and, like one of her characters, leave the baby of shame abandoned on the rocks of a distant tropical beach.

Small Indiscretions by Felicity Castagna is published by Transit Lounge

Walter Mason is an Australian writer whose book Destination Saigon was named by the Sydney Morning Herald one of the ten best travel books of 2010.
He is currently working on a book about Cambodia to be released in 2013. More at www.waltermason.com